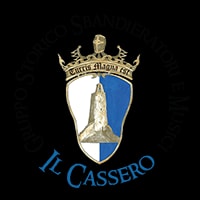 Warning: count(): Parameter must be an array or an object that implements Countable in /www/wp-content/plugins/mpc-massive/shortcodes/mpc_column/mpc_column.php on line 127

Warning: Invalid argument supplied for foreach() in /www/wp-content/plugins/mpc-massive/shortcodes/mpc_column/mpc_column.php on line 128

Flag Wavers and Musicians Historical Group The Cassero of Castiglion Fiorentino, born within the homonymous quarter founded in 1982, initially limited its activities to the historical procession that preceded the Palio dei Rioni in the third Sunday of June, but from year to year has had the ability and the possibility to expand its reputation from small towns, the great Italian cities to the European capitals.

In all these years, The Group has held exhibitions of great success around Europe (England, Germany, Spain, Romania, Malta, Luxembourg, Denmark, France and Portugal, Austria, Cape Verde), participating to parades, prestigious medieval festivals and sports events of global importance such as the 1997 Champions League Final.

One of the main aims of The Historical Group in recent years has been to strengthen their juvenily nursery, drawing on the reservoir of young locals, giving particular attention to these new levers that constitute the guarantee of the continuity of the district itself.

The Group, throughout his long career, has performed in traditional festivals, public events (parades, pageants, corporate events, sports events) and private events (weddings, banquets, conferences, meetings, social occasions), both in Italy and abroad with variable components according to requirements.

Warning: count(): Parameter must be an array or an object that implements Countable in /www/wp-content/plugins/mpc-massive/shortcodes/mpc_column/mpc_column.php on line 127

Warning: Invalid argument supplied for foreach() in /www/wp-content/plugins/mpc-massive/shortcodes/mpc_column/mpc_column.php on line 128